Recently, two of our pro-life banners (set up outside churches) were vandalized.

The first one, depicting drawings of a dead baby and X’s over the infant’s eyes: 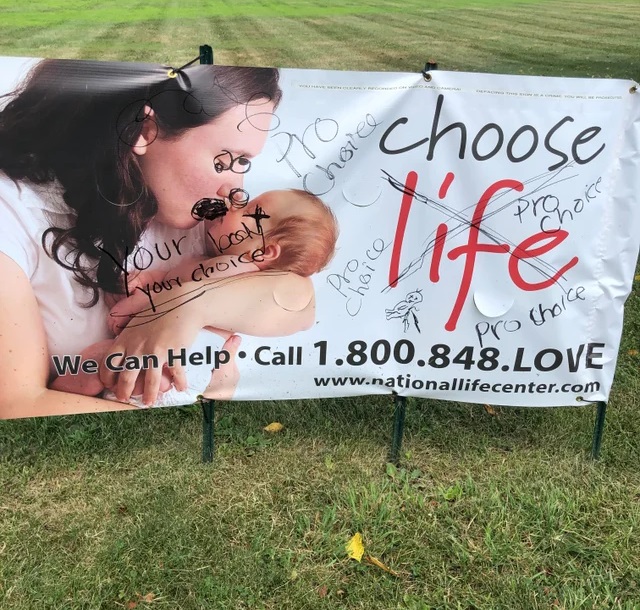 The second one, with writing like “Pro-choice” and “abortion is a right”: 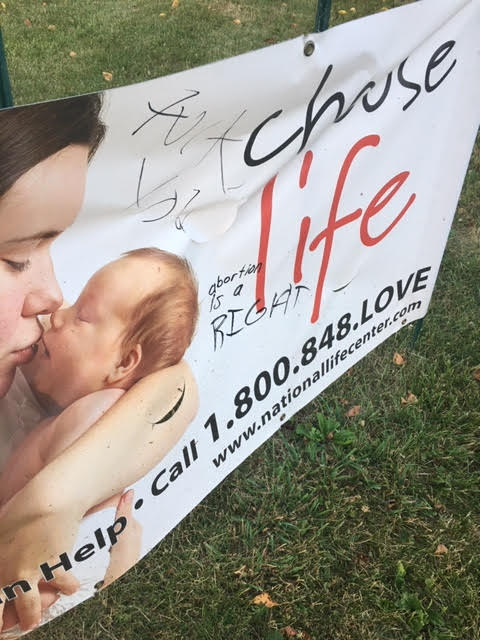 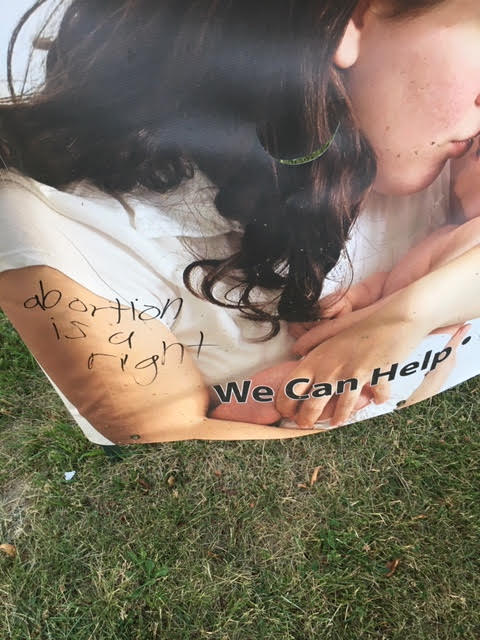 While the vandalism is disturbing, it shows that our message is being seen by many, and being heard. We are working to replace the banners that were vandalized to continue spreading the pro-life message.

In a 5-4 ruling upholding a Montana program to provide student scholarships for use at religious schools, the U.S. Supreme Court also in effect repudiated a 19th-century monument to anti- Catholic bigotry known as the Blaine Amendment.

The ruling reversed a 2018 Montana Court decision based on the state constitution’s Blaine provision barring aid to any school “controlled in whole or in part by any church, sect or denomination.” That provision is named for Senator James Blaine who in the 1870s argued for an amendment to the U.S. Constitution to bar use of public funds at religious schools. Coming at a time when immigration was rapidly increasing the Catholic population and Catholic parochial schools were growing in number, the proposal was widely seen as a reflection of Protestant anxieties about rising Catholic numbers and influence. While Blaine never did become part of the federal Constitution, 37 states eventually adopted their own versions.

In a statement following the decision, Archbishop Thomas G. Wenski of Miami, chairman of the U.S. Conference of Catholic Bishops’ Committee for Religious Liberty, and Bishop Michael C. Barber of Oakland, California, chairman of the Committee on Catholic Education, said: “This decision means that religious persons & organizations can, like everyone else, participate in government programs that are open to all. This is good news, not only for people of faith, but for our country. A strong civil society needs the full participation of religious institutions. By ensuring the rights of faith-based organizations’ freedom to serve, the court also promotes the common good.”

In his majority opinion, Roberts relied heavily on a 2017 Supreme Court decision (Trinity Lutheran Church v. Comer) that held that a Lutheran church in Missouri that operated a day school was entitled to receive funds from a state program for upgrading playgrounds as a safety measure. That decision, Roberts said, held that “disqualifying otherwise eligible recipients from a public benefit ‘solely because of their religious character’ imposes a penalty” on religious free exercise. Thus Montana’s denial of scholarships for use at a religious school did not pass muster. [Russell Shaw, Our Sunday Visitor, 6/30/20]

The Court struck down the law requiring abortionists to have admitting privileges at hospitals within 30 miles of their practice. The opinion in June Medical Services v. Russo is quite fractured and legally technical. It does not bring the pro-life movement any closer to overthrowing Roe v. Wade and Planned Parenthood v. Casey; but it does not likely move us further away from that end either. More litigation to that end is still required.

The narrow 5-to-4 ruling agreed that the burdens it imposed upon women were greater than its claimed health benefits. Yet Justice Gorsuch wrote of the dangers that abortionists in Louisiana pose to their patients. He noted the extraordinarily lax reviews the clinics conduct prior to hiring abortionists, reporting that abortion clinics had previously allowed ophthalmologists & radiologists to perform abortions! He also pointed to the many ethical and safety violations that Louisiana abortion clinics had committed in the past.

Employing detailed geographic & doctor-specific details (and even maps, printed in the opinion), the Court concluded that the vast majority of doctors and clinics would go out of business were the admitting-privileges law to stand, leaving many women without a sufficiently-close-by abortionist. But Gorsuch noted that one Louisiana doctor already had such privileges, that one hospital was already changing its admitting-privileges rules in order to make it easier for abortionists to succeed, and that privileges requirements applied to other types of ambulatory surgical centers (for example, colonoscopies, Lasik eye treatments) had not diminished the number of those centers able to continue operating. Also, Gorsuch highlighted the testimony of women abandoned by their abortionists to seek follow-up care, after the doctors had botched their abortion procedures.

Finally, only Justice Thomas took direct aim at Roe and Casey. In memorable language, he referred to the reading of the Constitution on which it is based as “legal fiction” and the “putative right to abortion [as] a creation that should be undone.” He wrote that it is “farcical” to imagine that the legislators who created the 14th Amendment’s “due process” language intended it to protect a procedure nearly completely banned in every state and territory in the U.S. at the time it was passed. He called Roe a “demonstrably erroneous” decision. [Helen Alvaré, Commentary, National Catholic Register, 6/29/20]

In the 1960s, when birth control devices and chemicals became prominent, the only common sexually transmitted diseases (STDs) were syphilis and gonorrhea. Today, at least 25 STDs are known, some which are incurable, and at least eight new pathogens have been identified since 1980, including HIV. Many of these STDs, such as chlamydia and human papillomavirus (HPV), greatly increase a woman’s risk of cancer. None of the “contraceptives” listed in this brochure prevent or protect against STDs or AIDS. Yet organizations like International Planned Parent- hood Federation thrust these methods upon trusting teenage girls, much to the detriment of their future health. [Concerned Women for America brochure, compiled by Catherine Hurlburt cwfa.org]

July 19-25, 2020, the dates of National Natural Family Planning Awareness Week, highlight the anniversary of the papal encyclical Humanae Vitae (July 25), which articulates Catholic beliefs about human sexuality, married love and responsible parenthood. Very helpful information about the benefits of NFP, how it works and its effectiveness, is available at the www.usccb.org website.

The original “Gerber baby” was Ann Turner Cook, now 93. A charcoal sketch of her cherubic face became the company’s official trademark. Since 2010, Gerber has held a photo contest to select a new baby brand ambassador each year. In 2018, the first Gerber baby with Down Syndrome was chosen.

This year, the contest winner is an adopted baby, another first. Magnolia Earl, age 1, charmed the judges “with her joyful expression, playful smile and warm, engaging gaze.” Her mother, Courtney, confirmed in a statement that Magnolia brings “joy to everyone she meets” and recalled speaking on the phone a year earlier with Magnolia’s birth mother, who was in labor. “The real heroes in this story are Magnolia’s birth parents,” she told the Today Show. “They chose her life and they sent her on an incredible journey.” It’s a story, and a photo, worth sharing – kudos for Gerber for recognizing it as much. [National Review, 6/1/20]

Kanye West announced last October that he has turned a corner in his life, converting to Christianity. In May GQ magazine interviewed him. “When you’re not in service to God, you can end up being in service to everything else,” he said. That is certainly true of many in the entertainment world. Tinseltown is known for alcoholism, drugs, promiscuity, and high rates of depression and suicide. Responding to a question that religion is a system of control, West said: “I see opportunity for creativity inside our faith.” Christianity may be restrictive, but it is a healthy tonic. It is not restraint that levels people–it is the abandonment of it.

Cultural elites who once embraced West are uneasy with his conversion. Some seem to have liked him better when he was offending people. The secular kings & queens who comprise the entertainment industry prefer raunch to the sacred. Kanye West should be welcomed, not disparaged, for going against the grain of the dominant culture. Given his huge following among young people, maybe he can help to transform it. [Catholic League, The Catalyst, 6/20]

A just law is a code that squares with the moral law or the law of God. To put it in the terms of St. Thomas Aquinas: An unjust law is a human law that is not rooted in eternal law and natural law. Any law that degrades human personality is unjust. One has a moral responsi- bility to disobey unjust laws. I would agree with St. Aug- ustine that “an unjust law is no law at all.” [Letter from a Birmingham Jail, Martin Luther King, Jr., 4/16/1963]

The Healthcare Advocacy & Leadership Organiza- tion promotes, protects and advocates for the rights of the medically vulnerable through direct patient & family interactions, community education programs, & development of concrete “life-affirming health- care” alternatives for those facing healthcare rationing and unethical practices, especially those at risk of euthanasia and assisted suicide. [halovoice.org]