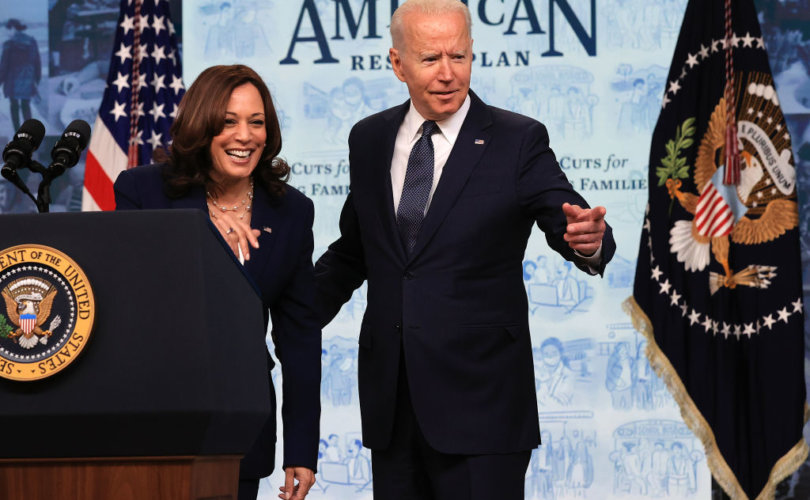 WASHINGTON (LifeSiteNews) – President Joe Biden delivered remarks on Thursday to a group of Democrat Party supporters wherein he focused on abortion and the alleged “right” to terminate unborn life as the central issue of the midterms.

He said: “Those who support ripping away the rights to choose don’t have a clue about the power of women in America, but now I think they do.”

Vice President Kamala Harris gave the opening remarks. After saying “votes are still being counted” she went on to say that Democrats “sent a message to the entire world” that “democracy is still in tact.”

As votes are still being counted, the Republicans look to be inching closer to a House majority, while the Senate race is still up for grabs, with outstanding votes to be counted in areas with heavy Republican support.

Pointing to the termination of unborn children, Harris said: “One does not have to abandon their faith or deeply held beliefs to agree the government should not be telling a woman what to do with her body.”

Referring to those who voted against rights for unborn children she said “thank you” which was followed by applause.

Biden began his remarks by saying he was thankful to supporters for “fighting like the devil” in the run-up to the midterms.

He quickly moved onto the economy, which he said was doing well, despite the record inflation that has taken place since he came into office.

The President went on to say that the election results were evidence that left-wing voters “beat the hell out of” opposition to abortion in the wake of the Dobbs decision that saw Roe v Wade fall.

Biden once again stated that he wants to “codify Roe v Wade as the law of the land” and that if Republicans pass a “national ban” on abortion with a majority position in the Senate and House, he will “veto it.”