Meet Mary Ann Kuharski on this episode of The John-Henry Westen Show. 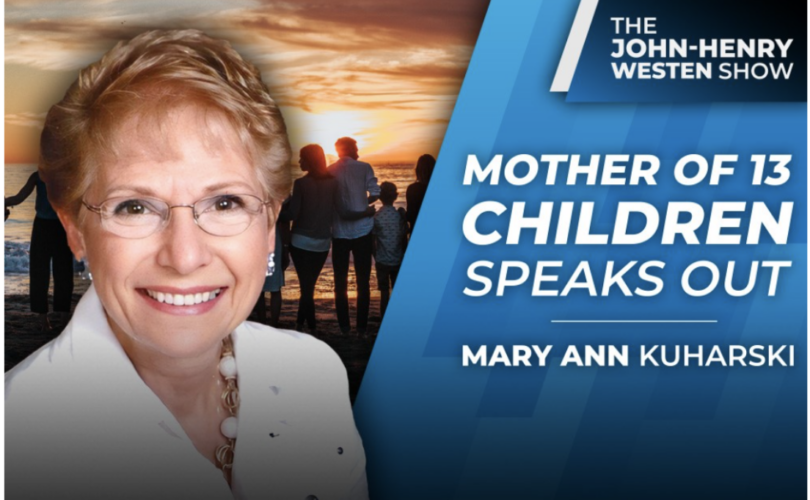 (LifeSiteNews) — As the abortion movement threatens our communities and pushes the anti-life narrative worldwide, LifeSite remains committed to sharing the biggest voices and most influential leaders in the pro-life movement — with the most powerful yet in a brand-new episode of The John-Henry Westen Show.

Kuharski’s remarkable pro-life experience comes from decades of building a culture of life through her own motherhood and her work for ProLife Across America. Her insights include:

Don’t miss out on this uniquely insightful interview on the spiritual significance and importance of motherhood from one of the most zealous pro-life advocates today — and on what other pro-lifers can learn from her wealth of experience as a mother, entrepreneur, and faithful Catholic.

Kuharski also reveals the deep impact that husbands, fathers, and other men make to fight and win against the culture of death — building a culture of life for generations to come.

“Men are natural providers and protectors. They want to help that woman,” she says.

LifeSite’s continued work at the forefront to protect life, faith, family, and freedom is now more important than ever. John-Henry’s interview with Mary Ann Kuharski is one you will not want to miss.

Life: “This is rudimentary biology”

“Aside from just having a ministerial preference for the unborn, we also serve the poor, the imprisoned, the marginalized, the oppressed, the sick and the aged. Whatever we need to do to uphold the image and likeness of God in humanity is what we do.” Deacon Kevin Cummings, Archdiocese of Kansas City, Kansas

Reflecting upon his time with MSI, an abortion mill, Kevin Duffy describes how he “always knew that abortion involved taking a human life but I felt, at the time, confident in the belief that women would undergo abortions regardless, so it was better for these to take place in hygienic and safe conditions.” But when MSI began to promote self-managed DIY drugs, Mr Duffy felt deep concerns regarding the safety and well being of women. “Increasing numbers of women are presenting with incomplete abortions at facilities after self- administering abortion pills which they had bought in local drug shops.”

Mr. Duffy left MSI in March 2019. In 2020, the announcement that women in the UK could get abortion drugs through the mail prompted him to conduct a project which exposed the lack of safeguards and recklessness of the UK’s DIY home abortion scheme. 26 sets of calls were made, resulting in 26 packets of abortion drugs being sent out to women who essentially did not exist. Duffy said: “To think that after just two phone calls taking no more than an hour in total, a woman who doesn’t exist, is not pregnant, is not registered at the recorded GP surgery, who misleads the service provider about her medical history and her gestational age, even changes her gestational age mid-process, is able to obtain the abortion pills, a service for which the abortion provider is paid by the government. And they called this a fantastic advance in women’s healthcare.”

“Women are not being well served and are missing out on essential clinical assessments. They are left to manage the expulsions on their own at home—and with no follow-up care afterwards. This is a long, long way from the comprehensive, safe abortion care that the abortion industry claims to provide.” Mr Duffy became the
Executive Director of the largest UK pro-life group, saying: “I decided to put my knowledge and experience at the service of the pro-life movement. I am certain that the false narratives of the abortion industry which claim to ‘care about women’ can be defeated and a culture of life which truly cares about the well-being of women and safeguarding of human rights can be restored, so that one-day abortion will be rendered unthinkable.” [The
Society for the Protection of Unborn Children, UK, 11/25/22]

The Centers for Disease Control (CDC) released abortion data for the year 2020. Even though there was an overall reduction in the incidence of abortion, abortions increased in 29 of the 47 states that reported data. Of concern is the large increase in chemical abortions. From 2019 to 2020, the number of chemical abortions increased by 17.9%. Overall, the share of all abortions that were chemical abortions rose from 43.7% to 53.4% during that period. Under the current federal administration, the FDA allows women to get a chemical-abortion drug with no personal medical exam. The U.S. abortion rate fell by more than 20% since 2010. Overall, pro-lifers have succeeded in reducing the abortion rate by approximately 50% since 1980. The long-term decline in the U.S. abortion rate is very solid evidence of the positive impact of pro-life service, educational and legislative activities. [Michael New, Ph.D., LifeNews.com, 11/28/22]

The problem with “the wise and the learned” is not that they’re educated but that they are trying to govern and run their own lives on their own terms rather than living in obedience to God, with an attitude of receptivity like a child.
Bishop Robert Barron, Daily Gospel Reflection, 11/29/2022

The U.S. could learn from one French organization that promotes marriage. “Based on the father/mother/child relationship, the family structure favors the renewal of ages and the stability of society,” states the website of La Manif Pour Tous (Demonstration for
All). It argues that children are not commodities to be traded and that mothers and fathers contribute to the public good by the raising of their children. “The family is the fundamental foundation of any society: the source of its human, cultural and economic wealth; an eminent place of solidarity, dignity, freedom and love.”

Children are the future of a society. They are also society’s most vulnerable members. La Manif argues: “Because it requires parents to provide for the moral & material direction of the family as well as the education of the children and the preparation of their future, marriage also protects the fruit of their love.” Civil marriage, then, protects the defenseless, whether spouse or child. [Fr. Patrick Briscoe, Our Sunday Visitor, 12/4/22]

Drawing on her experience on America’s Next Top Model and her work as a fashion model, Leah Darrow exposes the lies we are told about our worth being tied to our appearance. She invites us to look again at the real meaning of beauty. In her book, The Other Side of Beauty: Embracing God’s Vision for Love and True Worth, she shows how we can reclaim true and lasting beauty–the kind that doesn’t depend on self-doubt, exploitation, or comparison–when we reflect God’s glory and embrace our value as he made us to be: strong, brave, and free. She says: “Only when we learn to see ourselves as God does can we leave behind our culture’s definitions and demands and find lasting joy.” [https://www.leahdarrow.com/home]

LGBT activists privately hope to break having only two partners in a marriage, “to infect the straight world” with polyamory, and to “radically alter” or abolish marriage altogether. The practice, and advocacy, of non- monogamous “marriage” is one of the secrets buried in the LGBT movement’s closet. Kimberly Rhoten of the Polyamory Legal Advocacy Coalition announced that non-monogamy is “as large as the LGBTQ population in the United States.” The LGBTQIA2S+ movement has announced the latest addition to its ever-growing acronym: CNM, which stands for Consensual Non-Monogamy, or open relationships of the variety common in the LGBT community.

LGBT extremists view same-sex marriage & polygamy as ways to redefine, and ultimately abolish, marriage. Activist Masha Gessen admitted that “It’s a no-brainer that the institution of marriage should not exist.” Similarly, LGBT activist and journalist Michelangelo Signorile encouraged the LGBT movement to undermine “society’s moral codes” and “radically alter an archaic institution.” Christians’ argument that same-sex marriage will degrade the institution is coming to fruition.

Experts have long known two things: monogamous couples report higher levels of sexual and relationship satisfaction, due precisely to their exclusivity. “On a scale from 1 to 10 rating how crucial fidelity is to a successful marriage, young women’s average score was 9.8 and young men’s average was 9.7,” wrote Alan J. Hawkins of the National Marriage Project. Surveys consistently show that nine out of 10 Americans believe extramarital sexual relations are immoral. So how can social engineers break down widespread moral rejection of promiscuity? The same way they broke down public opposition to homo-sexuality: by declaring it is an inborn trait.

A stream of propaganda defining sexual preference fetishes as immutable traits has changed American morality. In 1972, 74% said “sexual relations between two adults of the same sex” is “always wrong.” In 2018, 58% said such relations were “not wrong at all.” Similarly, the few Americans who view polygamy as “morally acceptable” has nearly quadrupled since 2006.

“The concept of sexual freedom is promotion of the acceptance of deviant sex” said Peter LaBarbera, founder of Americans for Truth. Adopting an anything-goes sexual standard, and equating all relationships by labeling them “marriage,” is the next step toward abolishing the institution altogether, as same-sex marriage and polygamy advocates admit. [Ben Johnson, Same-Sex Marriage Advocates: Polygamy Is Next, The Washington Stand, 11/28/22]

This free monthly newsletter is used by dozens of churches as a bulletin insert, and since 2013 has had over 30,000 readers. To receive each month’s issue in your
inbox, email Frank Tinari, Ph.D. at tinarifr@shu.edu