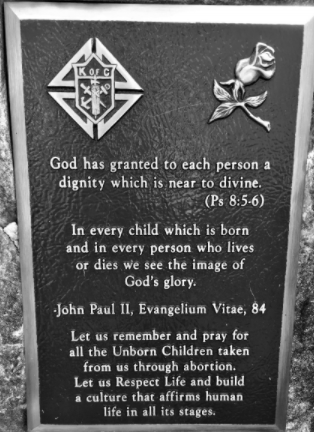 1. Many programs are expanding. For example, 40 Days for Life is now active in hundreds of U.S. cities and is going on right now through Nov. 1st.  People stand vigil, praying outside of abortion clinics. Also, the nationwide one-day Life Chain brings out thousands of people to give silent witness to our concern for a culture of life. And for those who have taken part in an abortion, the Church offers hope through Rachel’s Vineyard, a program of forgiveness and healing.

Another example: the Archdiocese of Miami’s Respect Life Ministry has been offering a monthly webinar as part of the U.S. Bishops theme of “Walking with Moms: A Year of Service.” September’s webinar was How to Be a Pregnancy Center Volunteer. A number of churches have been installing Love Life and other lawn banners. And other churches have erected memorial plaques for the unborn such as this one from Holy Family Church, Florham Park, NJ.

2. More people are becoming informed. The fast growing Relevant Radio network is also available anytime through its app, and folks who like to read are accessing papers like the National Catholic Register and Our Sunday Visitor, not to mention worthy websites such as www.lifesitenews.com, www.lifenews.com and www.priestsforlife.org.

3. Inroads made by culture of death policies have  re-invigorated culture of life proponents. More Christians are getting involved and taking action.  For example, in recent years the Knights of Columbus have funded thousands of sonogram machines used by pregnancy centers to help pregnant moms see that they are carrying a growing, developing person, not just a “blob of tissue.” Also, one of the fastest growing order of nuns is the Sisters of Life who work in inner cities helping pregnant girls deal with their crisis, and to help promote a true culture of love and life. More dramatically, one organization changes minds by visiting college campuses with a Jumbatron projector that shows actual grisly abortion procedures. (www.CreatedEqual.org)

1. Political party platforms are focusing more than ever on life issues. The Libertarian platform states life and abortion issues are strictly private matters.  The Democrat platform says “every woman should have access to … safe and legal abortion.” The Republican platform states: “we assert the sanctity of human life and …the unborn child has a fundamental right to life which cannot be infringed.”

Respect life groups such as Priests for Life, & the Susan B. Anthony List and others are seeking election volunteers to get out the vote. Log onto their websites if you might like to help.

On Sept. 20th a full page ad in the NYTimes was signed by hundreds of Democrat leaders urging the party to soften its stance towards abortion.

2. Even after 47 years of Roe v Wade, life issues like abortion are far from settled. U.S. Catholic Bishops have stated that the threat of abortion remains our preeminent priority because it directly attacks life itself, because it takes place within the sanctuary of the family, and because of the number of lives it destroys.

3. With an opening to be filled on the Supreme Court, a pro-life nominee could make the difference in pending court cases on religious freedom and abortion, even challenging the legitimacy of Roe v Wade.

Each October the Church in the United States celebrates Respect Life Month, and the first Sunday of October is observed as Respect Life Sunday. As Catholics, we are called to cherish, defend, & protect those who are most vulnerable, from the beginning of life to its end, & every point in between. During the month of October, the Church asks us to reflect more deeply on the dignity of every human life. (https://www.respectlife.org/)

“This year the Church celebrates the 25th anniversary of the landmark pro-life encyclical Evangelium Vitae (The Gospel of Life). Pope St. John Paul II’s prophetic document passionately reaffirms the Church’s constant teaching on the value and sacredness of every human life. It remains a foundational text for all our efforts to ensure that the life of every human person is protected & cherished.” Bishop Joseph F. Naumann

Archbishop Charles Chaput: “Nothing we do to defend the human person, no matter how small, is ever unfruitful. Our actions touch other lives, move other hearts in ways we can never fully understand. Don’t ever underestimate the beauty and power of the witness you give in your pro-life work.”

So many times the busyness of life can cause couples to lose their special connection and seem more like roommates than soulmates. Many couples say they find themselves in a place of schedules, finances and household management without real connection. You have to be intentional about pursuing those deeper places, the heart connections. This just doesn’t happen, you have to pursue each other. People feel this distancing due to busyness, exhaustion, neglect, living separate lives, sexless marriage, feeling unsafe, and not feeling a spiritual oneness. So, make time for each other, even a small amount without interruption, e.g., having a cup of coffee together, watching a show together, or reading the Bible together. Also, have conversations occasionally that don’t include the kids or the household. Talk about your wishes, passions and visions. And show a real interest in what is important to your spouse. (Dr. Greg & Erin Smalley, www.FocusOnTheFamily.com)

We proclaim that human life is a precious gift from God; that each person who receives this gift has responsibilities toward God, self and others; and that society, through its laws and social institutions, must protect and nurture human life at every stage of its existence. (USCCB Pro-Life Committee)

(Ed. Note: Dion was inducted into the Rock & Roll Hall of Fame in 1989: “With one foot in the Fifties and one in the future, Dion blended R&B with doo-wop and helped ring in the age of rock and roll.” The excerpts here are taken from an Op-Ed piece he published in the Italian Tribune, 9/17/20.)

“Catholics have a moral obligation to promote the common good. Vote in a conscientious manner. The US Conference of Catholic Bishops identified five current issues that are intrinsically evil and must never be promoted:

It can be a serious sin to deliberately endorse a candidate who supports and endorses evil actions. A well-formed conscience will never contradict Catholic moral teaching. If you are unsure of where your conscience is leading, read the unwavering Church teachings found in the Catechism of the Catholic Church & vote in accordance with God’s law. May God Guide Your Voting. God Bless America.”

A year after NJ’s Medical Aid in Dying for the Terminally Ill Act took effect, Metuchen Bishop James F. Checchio reminded Catholics in the diocese that it is their shared responsibility to respect & defend all human life. During the first five months after the law passed on Aug. 1, 2019, 12 NJ residents ended their lives under its provisions. The law allows those with a terminal diagnosis and a life expectancy of 6 months or less to seek permission from two doctors to end their lives with lethal medicine. Our efforts to save lives amid the corona virus pandemic, Bishop Checchio said, are inconsis tent with this law. “Young or old, healthy or sick, all human life is precious.”(Our Sunday Visitor, 8/30/20)

Why the Hang-Up About Abortion?

Those who support pro-abortion candidates often point to the importance of other issues to justify that support. Some reference the “seamless garment” approach, which looks at a basket of issues that affect human life, and then argue that abortion is just one of those important issues. For example, sometimes Catholics will point to the resumption of the federal death penalty by the current administration as a sort of equivalence.

In the United States in 2020, moral equivalence  just does not hold up. For many years, the Catholic Church has increasingly condemned the death penalty. There were five federal convicts executed in 2020. In the same span, nearly 1 million children will be aborted. Immigration, hunger, poverty are all important, too, but none of them will result in any where near the loss of human life that abortion does. Little wonder the U.S. bishops have listed abortion as “our preeminent priority” on human life, and it should be treated as such when we vote.  Abortion is qualitatively different from other issues because it results in the death of the innocent. Blameless children are wiped out just for being conceived. Abortion denies their inherent, God-given dignity as human beings, and it brings violence & death into the family. It is quantitatively different, too, because of the staggering numbers of lives lost. And, it is completely preventable.

Perhaps a large segment of the population can look the other way because the unborn are so small and invisible. But there is something deeply wrong with us as a society if we look away from the nearly 1 million uniquely vulnerable lives taken in abortion each year, and do not vote for pro-life politicians and legislation as a peaceful way to bring this atrocity to an end. Catholic voters should understand the gravity of the situation and act accordingly when they vote — in races local and national. (Michael Warsaw, Nat. Cath. Register, 9/27/20)